My Bio and This Blog's Purpose

Tackling the Headlines 86: The All-Amtrak Edition

What Gulf Coast hurdles?
Take: Yet another reason why an independent operator, not Amtrak should be running the New Orleans-Orlando route.

Amtrak considering eliminating QuikTrak machines
Take: What other boneheaded moves did the outgoing Boardman Administration saddle the public with that we don't yet know?

Late Saturday Hiawathas to continue
Take: The company's thinking outside of the box for a change.

Court denies Amtrak a role in setting OTP standards
Take: Hopefully, this is the end and the USDOT balks on appealing to the Supreme Court because in the wake of other passenger operators expressing their issues with the feds' pro-Amtrak bias.
Posted by The Rail Enthusiast at 17:48 No comments: Links to this post

Take: On the private companies' concern that the FRA is rigging the process in Amtrak's favor, it would not surprise me if it is.The FRA has been nothing but vague to this point and has gone out of its way to impose arbitrary barriers on non-Amtrak operators.

TTD Secretary-Treasurer Larry Willis, appearing at the Agency’s public hearing, emphasized that Amtrak and its experienced employees are in the best position to provide inter-city passenger rail - “not private entities that seek to turn a profit by lowering labor costs or cutting and eroding service.”

Take # 1: Tell that to the folks in Britain and continental Europe.


“The idea that a private entity can come in and provide more efficient service at a lower cost than Amtrak simply because it is a private entity is a myth,” Willis said. “Too often, private sector business models in the rail industry contemplate downgrading existing service, avoiding obligations under rail labor statutes, or undercutting collective bargaining agreements. The FRA must ensure that the pilot program shuts the door to this misguided model.”

Take #2: Somebody ought to tell Mr. Willis that Amtrak has already done that with the downgrades to the Silver Star and the City of New Orleans so for him to accuse other operators of downgrading service is laughable and is deflecting Amtrak's deficiencies. For instance after Amtrak lost the Virginia Railway Express contract, it was Keolis that added special events for VRE's riders.

If [the unions] are opposed to non-Amtrak operators, then they are in effect opposed to more jobs.

That is the bottom line. It's Willis and Ed Wytkind who are depriving others of jobs, not the AIPRO members or Ed Ellis, and they are doing so because they are afraid of having to adjust to a world of multiple operators who may in due time provide superior service to Amtrak.
Posted by The Rail Enthusiast at 23:11 No comments: Links to this post 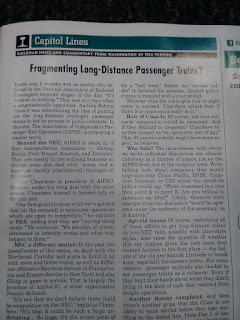 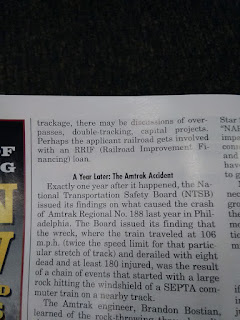 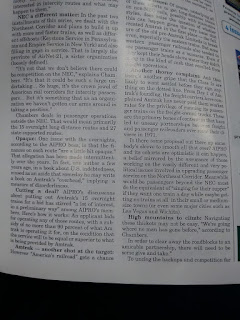 Amtrak--another shot at the target

Role of Class Is
Who bids?

Posted by The Rail Enthusiast at 22:36 No comments: Links to this post

Initial takeaway: Rail activists would be keen to read and reread the first sentence on what really led to the creation of Amtrak so they can stop spewing their defeatist nonsense whenever someone tries to propose out of the box ways to expand passenger travel in this country.

Third paragraph: Herzog was prescient and took notes before anyone on Capitol Hill even drafted PRIIA. Even though the AIPRO is small, it should say something that its members have the bulk of commuter rail contracts when a couple of decades ago, Amtrak had a near monopoly outside of the Northeast and Chicago.

Fourth paragraph: This expert nails it: The status quo cannot be maintained after 45 years when multiple operators have expressed interest in running intercity trains.

Fifth paragraph: The New Passenger Paradigm matches up with the late Gil Carmichael's Interstate II and my rail highway concepts.

Sixth paragraph: Based on what Mr. Chambers is saying, all that's needed is for the feds to actually enforce the laws and end the stasis once and for all. After all, when the time came to enforce the Pilot Program in accordance to PRIIA guidelines, the FRA waited a full two years to do so and by that time, there were too many loose ends that the old program just withered away despite immense interest. Another thing is to make sure that the feds do not play favorites--i.e., rig the process to maintain Amtrak's near monopoly (the 2012 near miss comes to mind).

Second column: Regarding the push for new legislation, somebody has to do it because the resident rent seekers sure won't. When it comes to Section 301 not being enforced, one can only look at the executive branch and ask: What happened, President Obama, USDOT, FRA? Was it in any way retaliation to some states returning stimulus money? Was the lack of enforcement actually stimulus related?

If the feds had followed the German model, we would already have: 1) states having greater flexibility to select operators and set their own standards and 2) Amtrak having a surplus amount of equipment due to it experiencing the same type of contract losses of its intercity routes that it's had with its commuter service. The next president and Congress would be very wise to adopt AIPRO's statutes. The second proposed statute would be an excellent way to make money. JR West does this now and Brightline and Housatonic plan on turning their station areas into prime real estate.
Posted by The Rail Enthusiast at 02:51 No comments: Links to this post